During his first months, the baby needs to experiment in maximum freedom his progressively evolving motor skills. 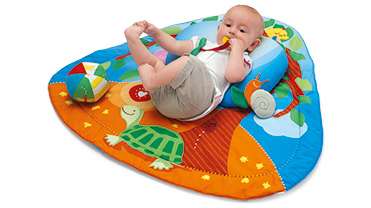 Months pass quickly and day after day our baby gifts us with new emotions. New he does not spend his entire time between meals and long naps but he loves to amaze us with smiles and funny playing attempts. He proves to be curious towards the surrounding environment and thanks to his better coordinated movements, raises and moves his head, focuses on his puppets and tries to reach them with his hands so to grasp them. He enjoys an evasion from the bed to see what is happening around him without any barrier: let's place him on a soft and colorful pat that allows him to observe the surrounding environment and above all to test in freedom his motor progresses.

In fact, if during his nap a supine, tummy up, position is recommended, when he is awake and during his first playing it is useful to place the baby tummy down because this position allows him to strengthen his neck and arm muscles and to avoid a constant pressure on the head. Step by step, the baby will make his first attempts to roll from tummy down to tummy up and vice versa and then to crawl for reaching the objects that interest him.

Let's put at his disposal the right tool: a pad that is rich in stimuli, colored by puppets and rattles, possibly with light and sound effects and that accompanies his first playing times with simple melodies.

The baby may play in supine position with the hanging toys that can be moved for building ever changing scenarios. Or, tummy down, he can try to reach little animals and figures that are hidden to be searched, touched and squeezed for producing a sound. His progress will encourage him to try new and new experiences on his pad, small colorful world where, driven by curiosity and supported by his new abilities, the baby will be able to refine his sensory, cognitive and motor skills.